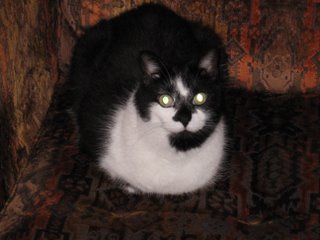 This is Zoe. She is our modern art cat… black and white, sort of like “op art.”
Zoe is a feline alarm clock. She meows loudly at my parents’ bedroom door early in the morning. They usually don’t answer until they are ready to. That doesn’t stop her from making long, involved speeches. She has a variety of meows, which she uses to express different needs. There’s the “get out of bed” meow, which I have previously mentioned. There is the “feed me” meow, which is then followed by the “maybe I want food, maybe I don’t dance,” which includes Zoe hiding under the dining room table while my mom calls her. She comes when she is ready and not before. Another type of meow is the “open the door” meow, for the patio and the basement. She looks at the doors and says exactly what she expects the human to do. Of course, the human (usually me), being well-trained, does exactly what the cat expects. Zoe’s most interesting meow is the after-dinner meowing session at the top of the stairs. It’s hard to tell what message she is trying to communicate, but she makes a long speech. It could be that she is reviewing the quality of the food and its presentation, but no one, except for the big Maine Coon cat, Smokey, speaks cat. So we don’t have a clue.
Zoe and Smokey, of course, also speak to each other. There are friendly, conversational meows. Then there are the wrestling matches and chase games, which lead to somewhat furious meows and even a few hisses.
When Zoe isn’t using her vast storehouse of verbal skills, she likes to play games. She has various toys, including stuffed mice and a few balls, that she likes to play with. She also likes twist ties and plastic bags, but the humans have to discourage the use of plastic bags as cat toys. Another fun activity for Zoe is to hide until the humans start wondering where Zoe is. When the humans have become frantic because they cannot find Zoe, she nonchalantly appears and gives the humans the “why are humans so stupid” look. It is a look that she has refined from constant usage. She also uses that expression after being offered food that she doesn’t like. The humans take note and don’t serve her the offending food any more.
I have become a great toy for Zoe. Ever since she was a kitten, she has enjoyed feet. Human feet, that is. She likes to sit on top of the bed in the middle of the night and bite feet through the blanket. She watches the feet move and then jumps at them and her mouth opens wide as she prepares for the bite. It is truly a happy moment for Zoe when she takes a great big bite, even though she gets nothing in her mouth but blanket.
Zoe, despite being a full-grown cat, is very kittenish in nature. She loves to chase her own tail. She runs around and around in circles. Sometimes, she catches her tail. Then she bites it. She must bite it fairly hard because she then meows and looks to see what or who bit her tail. She isn’t quite aware that her tail is attached to her when she is in Bite Mode, and, when she is in Hunt for the Culprit Mode, she isn’t quite aware that it was she who bit her own tail.
As soon as I can get a picture of Zoe’s friend, Smokey, I’ll tell you more about him.