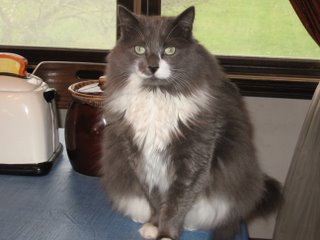 This is Smokey. Sometimes we call him Smokey the Bear. Sometimes, we call him Big Boy. My sister likes to call him Guy.
Smokey was a stray cat that my sister Diane fed. One day, he managed to sneak into her apartment. Her cat, Abby, was not too thrilled about seeing another cat in her space. When Smokey decided that Abby might make a good girlfriend, Abby had different ideas. His amorous attentions were answered with loud hisses and attempts at sharp bites. Abby had been spayed and she was not in the least bit interested in mating. Diane made the mistake of trying to separate the two cats. For her troubles, Abby rewarded her with a very sharp bite.
Smokey’s stay at Diane’s apartment was over at that point. Diane brought Smokey to our parents’ house.
Smokey was thrilled with his new environment and, especially, with Zoe, the cat that had already taken up residence there. Fortunately, Abby’s boisterous rejection of his amorous attentions did not scar him for life or even for the week. Smokey immediately turned his attention upon Zoe. But, like Abby, she had already been spayed. Zoe hissed at Smokey, too, but with much less force than had Abby.
When my dad realized that he was about to be the proud owner of not one, but two cats, he was not pleased. He said that one cat was quite enough and that this second cat had to go. He had seen a sign for a lost cat. He called the people who were looking for their pet and said that he might have their cat. He and my nephew Jamie put Smokey into a cat carrier and drove him over to the home of the lost cat.
Smokey was not their cat.
My dad kept on insisting that he did not want a second cat.
The cat had other ideas. He jumped on my dad’s lap and kissed him and purred loudly.
My dad began petting Smokey.
The cat purred and kissed my mom, too.
She began kissing and petting Smokey.
All talk of finding a new home for Smokey ended. My parents took Smokey to the vet and had him neutered and declawed. Once he stopped chasing Zoe around the house, the two cats became the best of friends.
When Smokey came to us, he was a ten-month-old kitten who was more fur than cat. Since then, he has grown up and has filled out into the big boy that he is today.
Smokey is a friendly cat who enjoys people. He likes to climb on laps and give kisses. Sometimes, he does that in the middle of the night.
There is nothing like waking up in the middle of the night to find out that you have a fifteen-pound cat dancing on your back, purring loudly, and waiting for attention.
After all, cats are nocturnal animals, even when they live with humans who very clearly are not.
Smokey has now been a member of the family for several years. His campaign to find a home has been highly successful. Everyone, including my dad, has acknowledged that this is a two-cat household…. with Smokey as King.