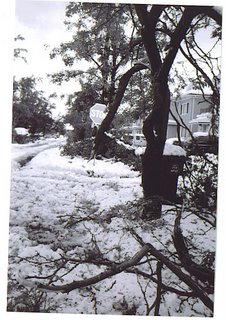 Painting autumnal trees was the theme of artist Jinni Kelley’s watercolor class at Stella Niagara, in , on October 12. While at this class, I learned how to use paintbrushes and sponges to give the effect of red, yellow, and orange leaves. Although the class was not painting an actual outdoor scene, our paintings reflected the reality of the world outside, at that moment.

After class, Jinni took me to my friend Ellen’s house in north , where I was to housesit for the weekend. As we traveled south, the reality of the world outside underwent a drastic alteration. The sky abruptly darkened and large snowflakes started falling.

After Jinni returned to Niagara County, I took out the garbage, prepared dinner, and went to choir practice at Blessed Sacrament Church on Delaware Avenue. The group at rehearsal numbered just thirteen, including choir director Frank Scinta. He commented on the “Blessed Sacrament Chamber Choir,” but he cut rehearsal short. When we left the church, we could see that the snow was coming faster than ever and that the weight of the wet, heavy snow dragged tree limbs down. Frank drove me back to Ellen’s house. We traveled down , past and . Driving was slow and arduous. When we were ready to turn onto Ellen’s street, we saw that it had become a terrifying sight. Broken tree branches lay everywhere, even in the middle of the street. I got out the car and could hear tree branches snap and crash to the ground. I ran to indoor safety.

In the morning, the telephone jarred me awake.

“Do you have electricity?” a neighbor asked.

I clicked on the lamp, which did not light. “No.”

Once I awakened, I went outside to photograph the street scene. Tree limbs were strewn everywhere. I went into the dining room and saw a tree limb leaning toward the back window. I didn’t recall that there had ever been a tree in the backyard. I looked again and noticed that this tree was actually the top of the neighbor’s tree, which had bent into Ellen’s yard. “There is a tree on the power lines,” I told a National Grid employee over the phone. She made out a work order.

I fed the fish, ate sandwiches, drew pictures, and cleaned the bird cages. Outside, the wind screamed. At night, I tried to write in my journal, but my fingers were cold and the flashlight didn’t help much. I crawled under the comforter and slept.

On Saturday morning, the house temperature was 54 degrees. Outside, the snow was melting, leaving puddles amidst the piles of branches and debris. I fed the birds and fish. I tried playing the piano while wearing gloves. The birds liked singing with a piano accompaniment. I wondered what was going on in the world. It had been two days since I had heard the news or read a newspaper. Fortunately, I still had telephone service. Ellen called shortly before dark and said that she and her children would soon pick up the birds. She didn’t want me to develop hypothermia. Go home, she said. Tomorrow, I said. After I feed the birds.

Those two birds were amazing. They still sang, despite the chill and darkness. My sister Vivian, who called a few times to give me tips on avoiding hypothermia, said that she would pick me up early on Sunday afternoon.

Darkness came early. I covered the bird cages with towels, and I went to bed.

In the morning, I tried pulling a tree branch from the driveway with no success. I rolled the empty garbage bin away from the street. Inside the house, it was 50 degrees. Vivian arrived and brought me back to . She told my parents that Ellen’s street looked like “an atom bomb hit it.” I felt very lucky to be able to go to a warm house, where I could eat hot food and read at night.

In my art bag, I carried with me paintings of trees that looked peaceful and whole, with colorful and bright leaves. I wondered if the broken trees of north would ever again resemble those paintings.